Port St.Johns is a small coastal town in South Africa and is known as the Jewel of the Wild Coast. The town has a population of about 6,500 people and is situated at the mouth of the Umzimvubu River, 220 kilometres northeast of East London and 70 kilometres east of Mthatha. The climate is humid and subtropical.

The town is thought to have been named after a Portuguese ship, the São João, which was wrecked in 1552 at at Port Edward. Seafarers mistakenly identified the mouth of the Umzimvubu River as the site of this wreck.

In the mid 1800s the local Mpondo Chief, Ndamase, allowed a few white traders to settle at the mouth of the Umzimvubu River. On 17 July 1878, Chief Ndamase's oldest son Nqwiliso ceded the western bank of the Umzimvubu River to the Cape Colony in return for being recognised as an independent ruler.

Port St. Johns has some of the most beautiful natural scenery in the country. It lies at the mouth of the Umzimvubu River which flows through an impressive gorge into an estuary located on the Indian Ocean.

The river mouth was used as a harbour, however this activity was abandoned in the 1940s due to siltation, which caused the river to become too shallow for vessels.

On both sides of the river ravine are high sandstone mountain peaks: Mount Thesiger (342m) and Mount Sullivan (304m). The peaks were named after two British Military officers.

Port St. Johns is the centre of tourism on the Wild Coast. It is famous for deep sea fishing, shore angling and is used as the centre for the annual Sardine run safaris/tours and adventures. 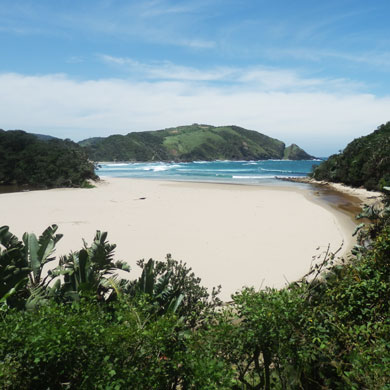