Why do the Sardines migrate?

Sardines have a short life cycle of 2-3 years. Spawning takes place in the spring and summer months off the Southern Cape on the Agulhas Banks. Each females release tens of thousands of eggs into water, which are then fertilized by the males. The eggs drift with the current in a westerly and then northerly directions, into the nutrient rich waters off the South African west coast. The larva mature and develop into juvenile fish which congregate into dense shoals and migrate southwards, returning to the Agulhas Banks in order to complete their life cycle.

During the South African winter months of June to August, the penetration of cooler water eastwards along the Eastern Cape coast towards Port St Johns, expands the habitat for the sardines. Sardines are typically found in water between 14 °C and 20 °C. Sardines group together when they are threatened. This instinctual behaviour is a defence mechanism, as lone individuals are more likely to be eaten than large groups.

It is likely that a cool north flowing current, inshore off the warm Agulhas current (that flows southwards), can be one of the factors responsible for the large shoals of sardines along the coast of Port St Johns.

This cool band of water inshore is critical to the Run. If the water is too warm (> 20 °C) the sardines will remain in the cooler water further south or move further offshore and at greater depths where the water is cooler. 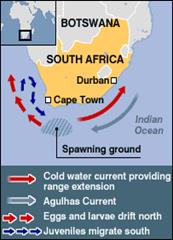